With the great fortune we experienced with the addition of Mollie to our lives, we knew we just had to have another puppy from Denise Hyer's Wynwood Ranch Mastiffs.  Meet Stetson - 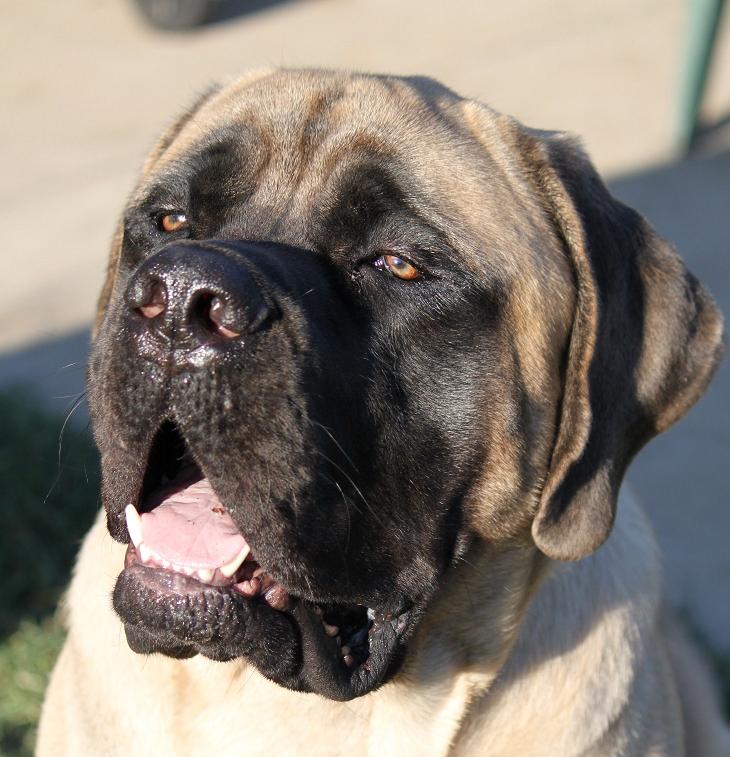 When I first arrived at Denise's house, we went immediately outside to see the puppies.  There were several other puppy buyers set to come that same weekend but all were waiting on me to make my pick so that they could discover who their puppy would be.  The selection process was remarkably easy despite the fact that there were several boys whom I would have loved to have.  We let the boys loose in the yard, I watched them play and romp, and I began the process of elimination.  The first one I was sure wasn't "him" went back in the pen, then the next.  Once I had it down to the final three, it became apparent.  I wanted the little boy with the black collar.  And I never looked back, as the phrase goes.

Stetson and I took advantage of any bonding time we could find that weekend.  We'd cuddle on the sofa late at night and first thing in the morning.  I knew I had the right boy.  And it became obvious that Stetson knew, too.  As I was packing up the last of my things, coming and going past the whelping box where Stetson waited to start the trip home, Denise was cleaning up.  Stetson was happy to play with her as she worked until I came down the hall and walked into view.  He immediately abandoned his efforts to gain Denise's attention and came to my side of the whelping box to jump up and beg to be loved on.  Denise laughed and said, "It's not like he's bonded or anything."  He's been my baby ever since.

As Phil and I watched him grow those first few weeks, we become more and more excited about Stetson's future.  We weren't the only ones to take notice of how beautifully he stood or how gathered, free and easy his movement was.  At the dogs shows, where we took him to initiate the socialization process and prepare him for the excitement he would be part of, we had many a seasoned show person approach us to compliment us on how beautiful he was and what nice movement he had.  We were reassured, as if we needed it, that the right choice was made that afternoon in Denise's back yard.

Since bringing Stetson home in December 2010, we have been blessed.  Stetson has developed into a beautiful, nice sized Mastiff with a gorgeous head piece, effortless movement, and a nice blend of type and structure.  He has been gifted with a somewhat goofy and crazy personality that makes him both a challenge and a delight at home and a joy to show.  His temperament, like Mollie's, is a testament to the great job Denise Hyer did with her breeding program.

Ch Wynwood's BC Spot At The Top