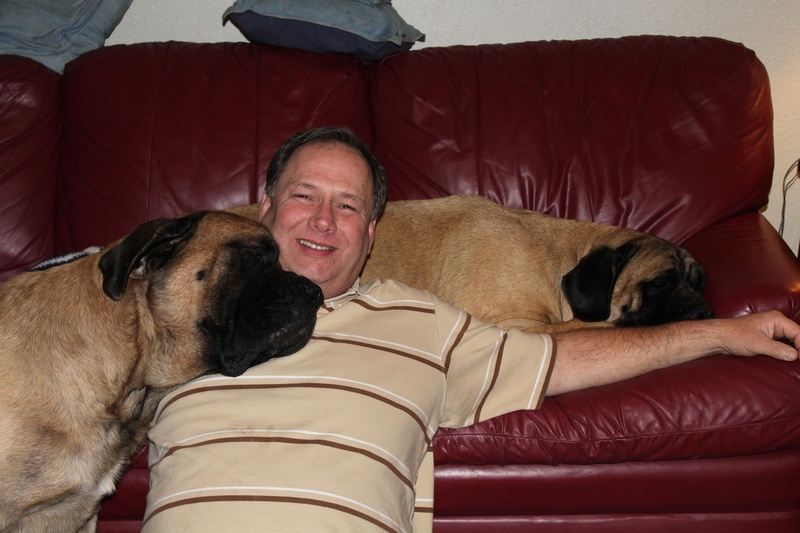 Bluebonnet Mastiffs was born the day we met Cargo although we didn't know it at the time.  We walked into a shelter to donate needed blankets and towels and walked out determined to bring the puppy mill bred, tall and lanky, 15 month old brindle male home.  Two days later, after introducing him to the other two dogs we had at that time and a visit to the vet for neutering, we loaded him up and changed our lives forever.  That was November 21, 2000.

Cargo was a gift.  He taught us what it was to truly love a dog.  He showed us what a Mastiff was all about.  He gave us more than he ever demanded of us and in return, all he asked for was to spend his time with us.  He would sprawl nearby when we would settle to some task, he would patrol the yard when we were doing the yard work, he would alert us to any potential threat, and his very presence guaranteed a safe night's sleep.  He went in the car at every opportunity and walked the neighborhood with us, always alert to any possible danger.

"Bear Mountain Mastiffs" was created the night Cargo saved us from the mama bear and her two cubs that had broken into our bedroom while we were sleeping.  Cargo sent them scurrying away and helped us avoid what could have been a very dangerous situation.  He showed us that although the Mastiffs of today are centuries removed from those that baited lions and bears in the Roman Coliseum, the genetics have descended through the generations.  It was not the last such occasion when one of our dear mastiffs ran interference between us and the bears in the mountains of Colorado.

When we relocated our kennel to the piney woods of East Texas, it was time to reevaluate the name.  Another kennel in Georgia had surfaced over the previous couple of years using the same name "Bear Mountain" and had acquired the rights to the .com and .org web addresses.   Although we were emotionally attached to the "Bear Mountain" name because of its association to Cargo, we were just beginning to grow our kennel and there would never be an easier time to change the name. So, change we did.  After much discussion and heartfelt reflection, we identified a connection to Phil's Texas upbringing and our love for Mastiffs finally had a new name - Bluebonnet Mastiffs.

With or without the kennel name, our memories of Cargo live on.  His gift to us will forever be reflected in our immense love for this breed.  Cargo was a giving and forgiving soul until the very end.  Even as he struggled on his final day, his very life was focused on his family.  His last act was gracious, giving, and loving as he saved those that loved him from having to make a difficult decision.  He may have been a less than stellar example of the breed in his structure, but he was a magnificent example in his heart.

In our love for Cargo, we discovered the sport of dog showing.  For many years, we talked about how we'd like to "do that" while watching the beautiful dogs on Animal Planet.  We thought, "How hard can it be?"  We purchased Nellie with the goal of learning how to show dogs.  Like lots of dreams, it took a while to get up the courage to actually step into that ring.

Nellie was a beautiful, dark red apricot.  She was a small bitch but was put together well, and as it turned out, was a good breeder.  When she turned two, we started researching stud dogs.  In retrospect, we had missed out on the benefits of belonging to the mastiff community and the vast wealth of knowledge from the breeders who've done this for years.  Still, we did the very best that we could with the resources at hand and chose a nice stud dog descended from the respected Pegasus kennel.  From that breeding we were blessed with eleven delighful puppies.  Kodi, Gumby, and Chuckwagon are from that breeding.

Kodi was my pick of the litter to be my first show dog.  Chuckwagon was our son's choice to be his dog and Gumby was the dog Phil wouldn't let me sell after they bonded when one of the puppies died on their one month birthday.  At the time, we thought we were crazy for keeping three puppies.  Now, we wouldn't have traded one of them.  We learned from them that although mastiffs share distinct characteristics and traits, each one has a unique personality.

When Kodi was nine months old, I finally quit making excuses and went to my first conformation class.  When he was eleven months old, we showed at the large show in Denver.  Our first show out and Kodi won Best Puppy in Breed.  Wow!  We were hooked.  Although no one with any sense ever recommends starting big, we went from the frying pan into the fire and decided to go to our first out of town show in Ft. Worth.  Shortly after that, he and I made the trip to our first MCOA (Mastiff Club of America) National Specialty.  By the end of that week, having managed to get through showing in front of the best of the best and not having irredeemably embarrassed ourselves, we were on our way.

Kodi earned his AKC Championship and Grand Championship titles (100% Breeder/Owner handled), won the coveted "Best Bred By" award at the 2008 MCOA National Specialty, received an invitation to compete at the reknowned Crufts Dog Show in Birmingham, England, was invited to and competed in the prestigious AKC/Eukanuba National Championship in 2008 & 2009, was selected as a "Top 5" dog in the Tournament of Champions at the MCOA National Specialty in 2009, named Best of Breed multiple times in breed competition with limited showing (often placing over dogs rated in the top ten nationally), and received an Award of Merit at the Denver show standing next to some of the top dogs in the country.  Through it all, Kodi's sweet nature carried through and we were just as proud of the CGC (Canine Good Citizen) certification he earned at the end of his name as we were the championship titles that preceded it.

Our move to Texas proved to be a blessing in many ways, not the least of which is the change in our lifestyle that allows us the time we've wanted to devote to the dogs.  With all of our children having moved on to lives of their own, we are experiencing life without children.  I am in the medical field and my job provides a schedule that allows me to spend time with the dogs in walking, grooming, or training.  I have my weekends off which lends itself to attending dog shows without chewing up valuable vacation time or requiring approval for time off.  After suffering from an accident in 1997, Phil has been unable to work regularly over the last several years.  As a stay-at-home husband, he is able to spend his days caring for the Mastiffs and our home.

After two years in East Texas, we came to the realization that, not only were we isolated from all the activities we enjoy, but the environment wasn't as healthy for the dogs as it needed to be.  The grass grown for hay in the area stimulated allergies that were difficult for the dogs to combat.  So, as much as we loved living in the beautiful country outside Tyler, we made the decision to move closer to the Dallas/Ft Worth metroplex.  It turned out to be a very rewarding decision and the dogs thrived.    Additionally, we are more centrally located and have easier access to dog shows, conformation classes, and social activities with our other dog loving friends.

With the convenience of living in the city and the fact that we have more time at our disposal, we have been able to become more active in our dog related activities.  We have had more opportunities to help rescue with transport, more chances to participate in activities with our friends, and the time to volunteer to serve our clubs.