McGee wasn't a planned addition but we haven't been sorry a day since we found him riding home in the back seat of the truck after a trip to the Priceville, AL show.  Months before, we had an opportunity to add a beautiful brindle boy to our family as a partnership with esteemed breeder and friend, Nancy Walker of Lazy D Mastiffs. At the time, our pups were only a few months old and we felt it wasn't the right time.  As we watched the beautiful boy grow and mature, we realized what an opportunity we had passed up.  So, when we were again offered the opportunity to partner in ownership with Nancy, we didn't make the same mistake twice.

We had enjoyed Nancy and Jimmy Walker's hospitality on the way home from the show.  We were all up and getting ready to pack up and hit the road when Nancy brought out her pick of a recent litter, Gabe.  He was a beautiful puppy.  Not more than a few minutes later, she brought out another puppy from the same litter and asked, "What do you think?" Ha!  I told her I thought he was beautiful, too. (I quietly thought to myself that I actually liked some features of the second pup better.) She told me to load him up.  I laughed and said, "That has to be Phil's call.  He's the one who has the bulk of daily dog care responsibilities."  Literally, the next thing I knew, the pup had been bathed and was sitting in our back seat!

McGee has an unassuming personality that disguises a goofy sense of humor and deep love and affection for those that he claims as his own.  He is very interactive with people he knows and loves but will keep a discreet eye on those he does not and look at them as if they are foreign.  He has the softest "bite" of any dog I've ever had.  I would trust him to take a treat from the smallest, most fragile fingers without them knowing he'd done it.  However, once he knows you, keep your guard up because he likes to head-butt and at four plus years old, he weighs in around 235 lbs with tree trunks for legs that can feel like getting punched by a bat.

We were blessed the day McGee joined our family.  Not only is he a thick, typey, massive dog with the most endearing personality but, we were gifted with just another reason to cherish our beautiful friendship with the Walker's.  The litter of puppies he sired with Mollie was an unanticipated but generous bonus.  He has proven to be a top quality producer with several other bitches and we are hopeful for some additional quality puppies from him in our future. 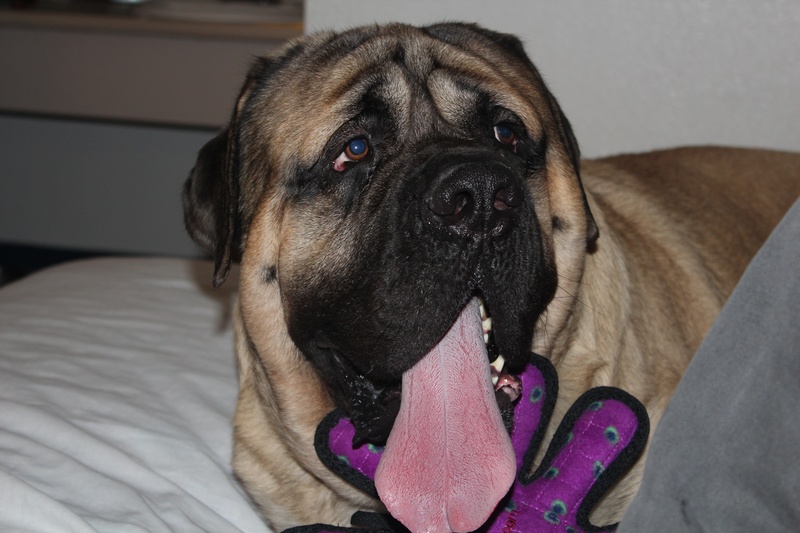