Claire came to us as a stroke of luck.  Another beautiful dog from Nancy Walker's Lazy D kennel, Claire was originally sold to family in East Texas.  By the time Claire reached the age of eight months, the family contacted us to let us know that they felt they weren't giving Clover the kind of home she deserved.  In a matter of two days, Claire had come to our house with the original plan that we would care for her until we were able to return her to Nancy.

Well, Claire never made it back to Lazy D.  She immediately settled in, determined to be one of the "kids" and demonstrated the amazing temperament that the Lazy D dogs are known for.  After discussing what the best plan for Claire would be, we reached an agreement with Nancy that Claire would stay with us, finish her AKC Championship, and we would all re-evaluate her future after her second birthday.

In the meantime, I got gutsy and took Claire to her first show.  Once the weekend was over, Claire had taken Winner's Bitch and Best of Winner's one of the two days for her first point.  Pretty successful for a girl who wasn't even leash trained.

A month later, with the intent to use our young and inexperienced girl to help build a major in Springfield, MO, we took Claire to her second show.  It turned out to be a much bigger show than any of us anticipated and drew five point majors for bitches all four days.  The first day in, my goal was to use the ring time as an opportunity to start training Claire with ring etiquette.  Before the day was done, Claire had taken me completely by surprise and managed to take Winner's bitch for her first major - a five point major, no less.  We spent the next two days trying to stay low key and not wear out our welcome.  On Saturday, our friend finished her girl so, on Sunday, I decided all bets were off.  I took Claire in determined to show her to her best.  When the dust settled, Claire had once again taken the five point major and rocked the boat.  Claire had managed to take Winner's Bitch, Best of Winner's and Best of Opposite over three specials!  It was said that some people were ready for the Texas group to go home.

For Claire's third weekend in the ring, we got to stay close to home and show in Dallas in early December.  Friday was a bust as we were late, missed the dogs completely, and barely arrived in time to literally run in the ring with Claire.  Saturday was better and Claire began to show that she was picking up the idea of what it meant to be a show dog.  Sunday, Claire behaved herself and moved like an athlete.  It paid off - Claire won Winner's Bitch and a four point major to finish her AKC Championship at the ripe age of one year and six days, and only three weekends out.

Claire was truly deserving.  She was a beautiful girl with great angulation, thick bone, and type.  She had a chest to rival most boys and a side gait that would take your breath away.  However, regardless of all of Claire's physical attributes, the most beautiful thing about her was her joyful, unflappable personality.  She was a tomboy who loved to play in the mud, never minded getting dirty and could give any of the boys a run for their money.

As luck would have it, circumstances changed and Claire ended up going to live with her Sire's breeder, Kim Wampler, for a spell.  When Claire never seemed to come into season, Kim was challenged as to how to bring her in so she could be bred.  Ultimately, Claire returned to live with us for good and quickly came into season with a little peer pressure help from our girls.  On 11/9/16, Claire whelped a beautiful litter of 11 fawn babies and settled in with us for good.  Sadly, she suffered an unexpected aneurysm, or possibly a stroke, a collapsed in our kitchen when she was a young 3 1/2 years old.  We were so grateful to have the beautiful family of her offspring to carry on her legacy. 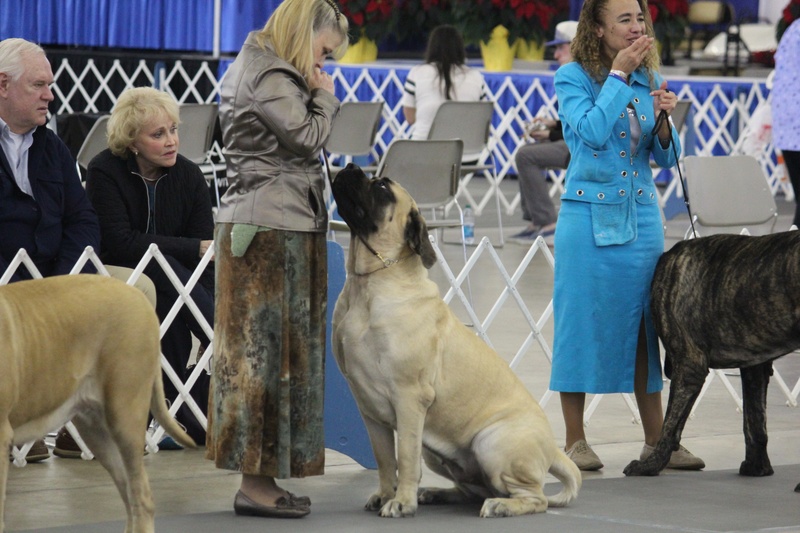