Brady - GCh Bluebonnet's Deep In The Heart of Texas

How does one describe Brady? Phil laughed when I called her a "party on four legs" because that description hit the nail on the head.  Brady was the first of her litter of twelve to put her little feet up on the side of the whelping box and peer over the edge to see what was going on outside of her four walls.  From the beginning, Brady was one of our two favorites.

After the litter was "grown", it was amazing to see how all twelve looked so much alike, however, Brady was the one that took after her father the most.  She was taller than she looked because she was a thick, typey bitch with a ground eating gait and an endearing head bob when she made up her mind she was really going somewhere.  She had lots of loose skin, and no matter how much or how little we'd feed her, she weighed in right at 200 lbs. (Very large for anyone not familiar with average weights in mastiffs.)  I'd been asked, more times than I care to count, if I wanted her that heavy or if she should "go on a salad diet."  I'd chuckle and go on, the same way I would when people would ask me where her saddle was.  Brady was predetermined to be a big, thick, typey mastiff bitch and she was never going to do anything to let me change that.

Brady was a bundle of energy if left to her own devices.  Don't get me wrong, she could settle down on the cool tile as well as any mastiff, but it didn't take much to get Brady up and moving.  When she did, she'd quickly see to it that everyone around her was invited to be part of her fun.  Sometimes, I thought all four of her feet hovered six inches off the ground and she had a perpetual smile on her face.  She would "talk" when she had something to say, but like two of her three sisters, she wasn't much of a barker.  She was perfectly happy to let the rest of the clan alert us to any interesting occurence while she stayed where she was and watched the happenings from her observation point.

Brady was like the girl in school that the other girls would have liked to hate but just couldn't - she was beautiful, but she was also cheerful, good-natured, kind, and very fun to be around.  Too bad she had figured out how to get by on her looks because underneath that party personality was a girl with a brai

We lost Brady suddenly one morning.  She went out into the yard like always but when Phil called her back in, about half way back to the door, she started to stumble.  Phil called me at work and I was able to get home in time to load her into the van, with her assistance and head out to the vet.  However, I didn't make it to the end of our street before she was gone.  The vet determined that it was likely an aneurysm, possibly a stroke - just an unfortunate event.

Brady was a "Breeder's Bitch"  She was the type of mastiff girl every breeder hopes for.  Sometimes, I see a puppy bitch that a breeder friend has that reminds me of her and it's all I can do not to scoop her up and run home with her.  Brady was unassuming and so easy to get along with and I can only hope I will be blessed with another girl as sweet as she 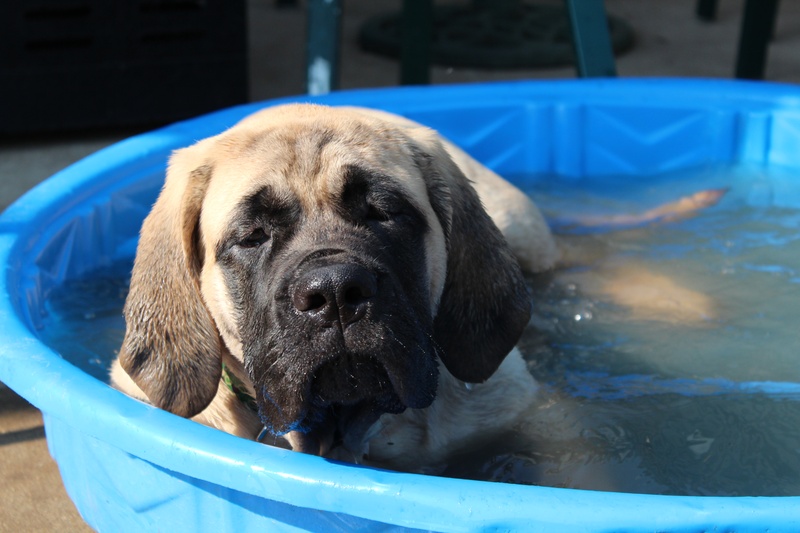