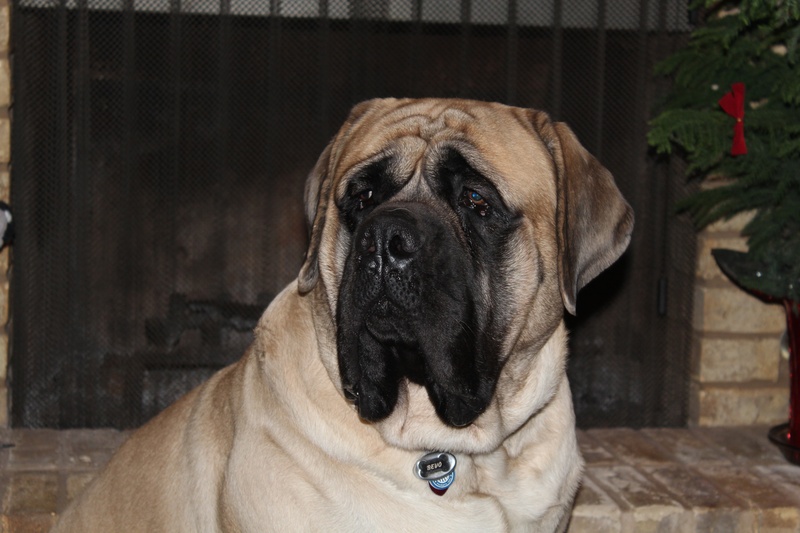 Bevo is one of those dogs that made an impression on people when they met him and was not easily forgotten afterward.  Often, it was the obvious feature that made him memorable - his size.  However, frequently it was other traits that made him the topic of conversation - his beautiful head, his perceptive eyes, his wicked sense of humor, and too often, his intelligence. We didn't plan on keeping a boy from Mollie's first litter but when Bevo hit eight weeks, we realized that the perfect home had to come along or we had to keep him.  The perfect home never came along.

Bevo was a beautiful dog who earned his championship young and hung out at home to grow and mature into what we knew would be a remarkable mastiff.  He was approximately 225-230 lbs, 31-32 inches, with thick bone and a beautiful light fawn coat and dark mask.  He matured exactly as we expected but never did return to the show ring to earn his GCh.  He preferred to stay home and keep the homefront safe.

As beautiful as Bevo was, it was his intelligence that gained most people's respect.  Phil and I would have sworn that he understood conversation.  As a natural Alpha, we managed the other intact dogs with care so that no one dog had to take a stand to define their place in the pack.  When we would go to let the other dogs out, all we'd have to do is tell Bevo what we were doing and he would quietly go sit on "his" loveseat, waiting for the other dogs to come or go as necessary.  If one of the other dogs walked past the loveseat, Bevo would be careful to turn his gaze so as not to make the other dog feel challenged.

My favorite story about Bevo's intelligence began when he was approximately 15-16 months old.  One afternoon, Phil went looking for Bevo when he realized he hadn't seen him in quite a while.  Phil called and called, went out to the back yard and called and searched every bush.  Still no Bevo.  As a last resort, Phil decided to check Jake's room, which had been closed off ever since he had shipped out to his new duty station in Okinawa.  The door was closed as usual but Phil went in to check anyway.  There, on the bed, under the fan, lay Bevo.  He had opened the closed door, flipped the light switch on to turn on the fan, closed the door behind himself and crawled up on the bed for a comfy nap.  It wasn't a fluke because not long afterward, he did it again.

To the last day, I could carry on a conversation with Bevo and I would swear he understood every word.  That isn't to say that he'd heed what I said (he is a mastiff, after all) but I knew he understood.  And when he'd talk, I knew he looked at me like I wasn't not too bright since I couldn't make out what he was saying without a little game of "Elimination."  It was a good thing he loved and respected his mother, Mollie.  She could read him like a book and was always one step ahead when he'd get some crazy idea in his head about misbehaving.

We lost Bevo to a flukish rattlesnake bite.  They had started dirt work on a vacant lot at the end of the street and on the first warm day of the year, Phil left Bevo outside to enjoy the sun.  A Couple of days later, when his tail was swollen and he was definitely guarding it, we went off to the vet to discover that he had been bitten at the base of the tail.  Had it been 6-8 inches down the tail, we could have amputated.  However, our only choice was conservative management and to hope beyond hope that his immune system would pull him through.  Ten days after he got bit, it became clear that there was no recovering from the damage the toxins had done to the tissue in his tail and pelvis so we made the only kind decision we could.  It was difficult to see a dog still vibrant and full of life but have to make a choice to say goodbye because the fast approaching end would take that image from us.  Bevo's was a big body and a big heart and we still feel his absence in our pack.